The New Year Provides a Fresh Opportunity to Get Involved Locally 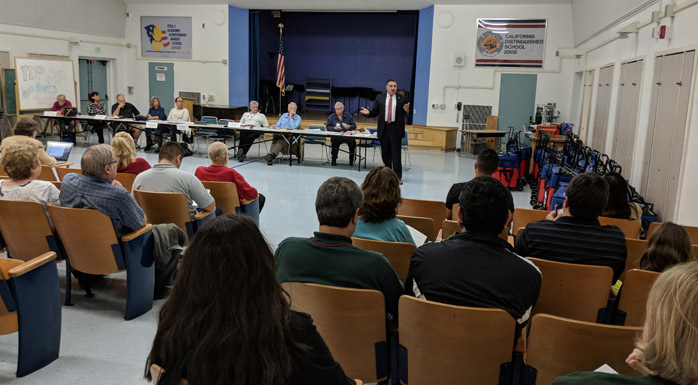 Still working to figure out your list of resolutions for 2018? If you’re considering something like “become more involved in my community,” attending a Northridge West Neighborhood Council meeting would be a great place to start.

Held at Calahan Street Elementary School on the second Tuesday evening of each month, meetings provide an opportunity for local leaders to speak with community members face-to-face.

At the November meeting, California’s Assemblyman for the 38th District, Dante Acosta, chatted with attendees about local issues like homelessness. He also spoke about legislation he has worked on. like Assembly Bill 754, which would provide small grants to the state’s foster youth to pay for school events and activities.

Southern California Preparedness Foundation was also honored with the first-ever Public Service Champion award for their hard work on the Valley Disaster Preparedness Fair, which brought 7,000 attendees into Northridge West for the 10th annual event held the previous month at Northridge Fashion Center.

The upcoming December meeting will play host to Dale Penn from S.O.L.I.D. (Supporters of Law Enforcement in Devonshire). Mr. Penn will speak about how the organization supports and provides resources to LAPD’s Devonshire Community Police Station, which serves the communities of Chatsworth, Granada Hills, Northridge, Porter Ranch, Winnetka and West Hills.

Attending a Northridge West meeting can also lead to becoming even more involved in our local community. Three new board members – Jacalyn Williams, Pamela Bolin and Earl Fagin – were sworn in recently. All were introduced to the neighborhood council system by attending board meetings.

There is currently one open board seat. So… How about that resolution for the New Year? Join us at 6:15 p.m. on Tuesday, December 12 for our annual “Holiday Mixer” celebration.

2017-11-22
NWNCadmin
Share
Previous SoCalGas Reports on Energy Reliability
Next NWNC Ponders the New Year: How Best to Be Relevant in Our Community